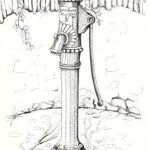 The La Touche Legacy works very closely with the Greystones Archaeological and Historical Society and full details of events and talks and historical facts can be found on their site.

The La Touche Legacy, since its inception has worked very closely with local groups, organisations, business interests and clubs to help their development.  This has been done either with financial support, mentoring or local support.Some of the organisations assisted are as follows: