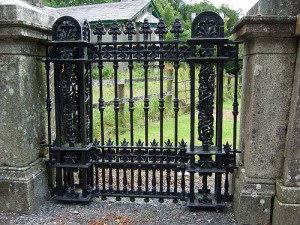 The historic lands of Harristown Demesne were in the hands of the Eustace family since the 16th century. The estate rose to prominence under Sir Maurice Eustace, who built the present house in 1662, became Lord Chancellor and obtained a charter from Charles the Second in 168 1, constituting his estates a manor. When Sir Maurice died in 1704 the estate was inherited by his three daughters and divided into three parts – Harristown, Mullacash and Carnalway. In 1768, David (The Second) La Touche bought Harristown, but it was David’s son, John, who was the first La Touche to take up residence. John enclosed the present demesne and built a new road and bridge over the Liffey.

In 1767, John tried to get elected to Parliament as Member for the City of Dublin, his opponent being the Marquis of Kildare, (later Duke of Leinster). John lost, and the merchants of Dublin were so disappointed that they presented him with a gold snuffbox. In spite of this setback, John sat as a knight of the Shire and was one of the five La Touches (the Five Just Men) who sat in the last House of Commons at the time of the Union. Of these five Lecky declared: “this family may claim, what is in truth the highest honour of which an Irish family can boast – that during many successive Governments, and in a period of the more lavish corruption, it possessed great parliamentary influence, and yet passed through political life untitled and unstained.”

John died in 1805 and his son, John, succeeded. He died in 1822 and his brother, Col. Robert La Touche, took over at Harristown. Robert had married Lady Emily Le Poer Trench, daughter of the Earl of Clancarty, and there were four children of this marriage. The twins, John (The Master) and William, were born in the house in Merrion Square in 1814. John, William, and their other brother Robert were keen huntsmen, John being Master of the Kildare Hounds 1841-45. However, due to John’s serious fall, and Robert’s tragic death in a stand at the Curragh in 1845, ended their hunting involvement.

John, called “The Master”, succeeded in 1844 and lived at Harristown for the next sixty-two years. His wife, Maria, only child of the Dowager Countess of Desart, County Kilkenny, was a very cultivated person, with a particular interest in botany, drawing, languages and poetry. John Ruskin called her “Lacerta”. She was an avid letter-writer and wrote a number of tracts on religious and social themes.

She also wrote two novels, “The Clintons” (1853), and “Lady Willoughby” (1855). She had a horror of blood sports, and complained often about the neighboring gentry, whose chief delight was in such country pursuits.

During John’s lifetime, the traditional family banking connection was broken. Following the Famine years, like most landed gentry in Ireland, the La Touche fortunes declined and they borrowed large sums from the Bank of Ireland. In 1870, the La Touche Bank closed and was taken over by the Munster Bank. When the Bank closed, however, all their accounts were in credit and relations with the Bank of Ireland continued to be amicable.

During the Famine John initiated drastic measures in his own household, “allowing no white bread or pastry to be made, and only the simplest dishes to appear on his table. The deer-park at Harristown ceased at this time to have any deer in it; all were made into food for the starving people.” He busied himself with his farm tenants, and supported Land Reform under Gladstone. 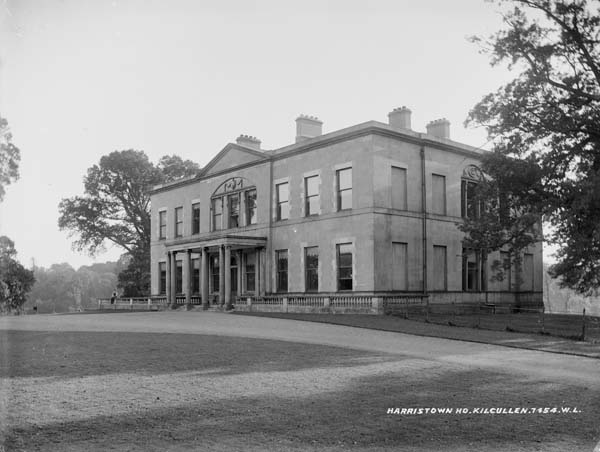 The La Touches in Ireland had adopted the practices of the Established Church, but around 1857 John first heard the preaching of Dr. Spurgeon in London and was gradually won over by his brand of evangelism. He set up Bible studying classes in Harristown. These became the nucleus of a Baptist Church group, which used to meet in Rose Cottage, named after John’s younger daughter, Rose. He also became very active in Christian Relief work in London, raising money to rescue fallen women, and was instrumental in founding the London City Mission. In 1882, he built a Baptist Chapel and a fine Manse at Brannockstown, and was a regular benefactor of Baptist work throughout Ireland.

John had an interest in education, as did all the La Touches, and he knocked down the remains of Portlester Castle to build a school at Brannockstown, which opened in 1885. This school prospered for twenty years, but under his son, Percy, the pupils moved to the Carnalway National School. It re-opened in 1928 under Catholic management and it is still in use.

The love story of Rose La Touche (daughter of John and Maria) and John Ruskin has been well documented. John and Maria met Ruskin in London and invited him to visit Harristown. Rose was ten years old when she first met Ruskin in 1858. Three years later Rose and Ruskin were in correspondence. Her parents were uncomfortable with Ruskin’s religious skepticism, and so Rose and he did not meet again until 1865, when he proposed marriage to the eighteen-year-old Rose, who required him to wait until she was twenty-one. Rose’s father was implacably opposed to the marriage for both religious (Ruskin was divorced) and age reasons (he was thirty years Rose’s senior), and Maria was worried about his reputed impotence and Rose’s ill health. Eventually, Rose went to London in Jan. 1875 for medical care and Ruskin attended her solicitously. He last saw her on February 14th. She died on May 25th and Ruskin didn’t bear of it until the day of her funeral at St. Patrick’s Church, Carnalway, Co. Kildare on May 28th, 1875. Her parents resumed their friendship with him during the 1880s.

When “The Master” died in 1904 in his 90th. year, his son, Percy, succeeded to the estate, and spent his time in those pursuits abhorred by his mother. He moved in the highest levels of society and was a favourite of Edward the Seventh. He married Lady Annette Scott, a sister of the Earl of Clonmel, but they had no children. After his death in 1921, his sister Emily’s son succeeded, and the estate passed through two other owners before being sold to Major Michael Wentworth Beaurnont. 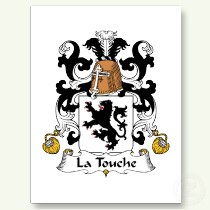