The story of the Marlay La Touches centers on banking and religion. David (the third) La Touche worked in the La Touche Bank. He was born in 1729 and set up his countryseat at Rathfarnham, County Dublin. He had married Elizabeth, daughter of George Marlay, Bishop of Dromore, in 1761, and so he named his estate Marlay. In the same year he entered the Irish Parliament to represent banking interests and he did so for forty years. David became part of Dublin’s aristocratic circle, respected for his wealth and his lavish hospitality in Marlay. Marlay had its own private theatre, in which both Henry Flood and Henry Grattan played in Macbeth.

David III helped the Government with a loan of £20,000 in the dark days of 1778, but when the Castle sought further credit later, it was not granted. He was to the fore in negotiations, which led to the foundation of the Bank of Ireland in 1783, and was appointed its first Governor, a post that he held for eight years.  David’s politics during the 1770s and 1780s were very close to those of Speaker Foster. Both believed that the Irish Parliament was very useful for promoting economic development, but both were totally opposed to Catholic Emancipation. Of the five La Touches sitting in Parliament in 1800, only David Ill supported the Union, but Grattan forgave him, as he believed that his vote came from conviction, and had not been bought.

David was an investor in the Grand Canal Company, and in 1800 he was its Treasurer. He and his brothers were founding members of the Kildare Street Club in the 1780s; he was also a Wide Street Commissioner, and he was a treasurer of the Lock Penitentiary. In fact, the La Touches supported with their time and money most of the large charitable and cultural organisations of the time. They were also Freemasons. 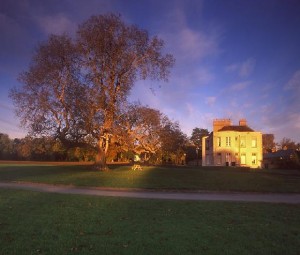 David and Elizabeth had six sons and five daughters. During his lifetime, his sons were brought into the Bank, and when he died John David, whom David Charles in turn succeeded, succeeded him. When David Charles died unmarried in 1872, his brother, Charles John Digges La Touche now headed the Marlay La Touches. Charles had been at Oxford and knew Newman (later a Cardinal). In 1844, Charles caused consternation among the wider family by becoming a Roman Catholic and moving to Tours in France. Charles’s son, John David, worked in China in the Imperial Chinese Customs Service, and on his retirement, he returned to Ireland in 1925 and bought a fine residence at Kiltimon, Co. Wicklow. The estate at Marlay had long since been sold to Tedcastle’s, the coal merchants. 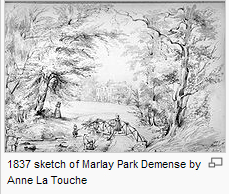 The family was well connected with the Professional Church. Rev. John William La Touche was the second son of David IV of Marlay and his wife Lady Cecilia, daughter of the first Earl of Milltown. Rev. John had three wives, not of course contemporaneously. He was appointed to succeed Dean Scott for many years the absentee rector of Clonemagh, Co. Offaly. Scott had accepted tithes of £500 a year as an absentee. The new Rector demanded £1,500 a year under the Tithe Commutation Act even though he also proposed to bean absentee. The mainly Roman Catholic population were outraged but offered £1,000 a year to La Touche. This event took place in 1829 – an early tithe war tussle. The Rev. La Touche retained the Rectorship until 1848 and later became a prebendary of St. Patrick’s Cathedral in Dublin.